Speaking Volumes: The Pleasure of Reading 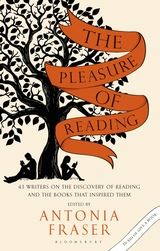 There is a word for the awkward way people stand when examining other people’s bookshelves: ahenny. Douglas Adams made it up, and it is best used like this: “She was standing ahenny when he entered; he understood at once that he had been judged for his books and found wanting.”

I wish some other benefactor would invent a word for Antonia Fraser’s explanation of: “The deep division that exists in the human race, between those for whom books are an obsession, and those who are prepared, good-humouredly enough, to tolerate their existence.”

As Fraser says in her introduction to The Pleasures of Reading (Bloomsbury), compiled in aid of www.giveabook.org.uk, this gulf is unbridgeable. This book, which interviews 43 writers about their early reading lives and the books they love, taps into another of Fraser’s truths: it is as fascinating exploring the reading of other writers as it is to look at the homes in which famous architects live.

For anyone who loves reading, this collection is unmitigated pleasure. The poet Stephen Spender confesses: “In old age I go back to masterpieces.” John Fowles rants about the isolation of readers in a world obsessed with cinema, TV (and Twitter): “Like raving about music to the deaf.” Doris Lessing, who taught herself to read after leaving school at the age of 14, declares herself a non-Poohist in the longrunning wrangle between Winnie-the-Pooh worshippers and haters: “The hero is a stupid little greedy bear.”

Most writers start out by reading voraciously but indiscriminately. The range of experience is widely varied, from those who grew up in the UK to those whose childhoods were in Africa, India, Pakistan or the Far East. Philip Zeigler read everything he could find, accepting as an adult that his reading is circumscribed by what he has to read – for book reviews or literary prizes, for instance. JG Ballard’s early memories of reading were shaped by Shanghai – a vast, polyglot metropolis, its bookstores stocked according to “an American zone of influence”.

Nostalgia is only one aspect of a reader’s life; the truth is that books are not for sissies. Judith Kerr read Kipling, Johanna Spyri and Else Ury, who wrote “undemanding but inventive stories”. It gave her a shock to come across a later work by Ury, who was a German Jew, where the heroine cheers Adolf Hitler and knows that “only happiness lay ahead”. (It was not true for Ury; Kerr tells what happened to her in one chilling paragraph.)

AS Byatt spent most of her childhood in bed — “greatly blessed by very bad asthma” – hours that she spent reading. From fiction, she learned fear: Blind Pew tapping in Treasure Island, Jane Eyre locked in the Red Room, Pip on the marshes being grabbed by Magwitch. Magaret Atwood read the complete, unexpurgated Grimms’ Fairy Tales, which her parents had ordered by mail: “unaware that it would contain so many red-hot shoes, barrels full of nails and mangled bodies”.

John Carey speaks for all booklovers when he writes: “I was lucky, being born into a house with books.” He divides the books in his house into “furniture” – sets of encyclopaedias, seldom consulted – and “real books”, Biggles, The Boys’ Book of School Stories, and Jane Austen.

For Gita Mehta, reading in India was democratic – “having the pleasures of reading shouted at you by pavement booksellers”, exploring the “secret shifting” Indian lending libraries which fit into garishly painted tin trunks. In contrast, Buchi Emecheta grew up in Nigeria, where reading was not a major activity – but storytelling was. She did not understand the wolf in Little Red Riding Hood: “In our families, grandmothers helped a great deal in making life harmonious.” She loved Austen and Achebe, the Brontes and Baldwin.

Kamila Shamsie’s impatience with the question postcolonial writers often face — “Who do you write for” — stems from her childhood reading: “CS Lewis is unlikely to have written for a girl in Karachi, but that doesn’t mean any boy in London grew up with a greater claim on Aslan than I did.”

I had a far broader understanding of bibliophilia, and the seductive powers of story, when I’d finished The Pleasures of Reading. It made me wish someone would do an Indian version, but that might be a more unsettling collection.

Rassundari Debi’s Amar Jiban, was published in the 1870s. She writes of an ambition that was then forbidden: “I came to be possessed by a single wish: I will learn to read, and I will read a sacred text. I began to resent my own thoughts. What is wrong with me? Women do not read, how will I do it, and why does it bother me so….” She taught herself to read in secret, and then she taught herself to write, authoring the first proper autobiography in Bengali literature.

For Daya Pawar, the Marathi poet and writer, books were an escape and a scourge. He writes in Baluta (1978, translated by Jerry Pinto): “I began to escape from the Maharwada, not just physically but mentally too into the world of books… All sorts of questions formed a raucous tirade inside my head.

Why did I ever discover the world of books?
I could have been a stone in a stream,
Grazed cattle in a meadow,
No need then to bear the scorpion’s sting.

But despite the perils that accompanied the discovery of reading, Rassundari Debi and Daya Pawar became writers, like the 43 essayists in The Pleasures of Reading. It is a logical, if not inevitable, transition.

Browsing in her grandfather’s study, Kamila Shamsie rejected Gibbon, Pliny, Marx, The Iliad, in favour of a book in blue binding called All Dogs Go To Heaven. She read it, and she howled, and read it with her best friend, Asad, who was also deep in mourning for his pet dog. He said, “Why don’t we write a book?”

“And so we did,” Shamsie writes. “We called it A Dog’s Life, And After. I was eleven years old; I haven’t stopped writing fiction since.”