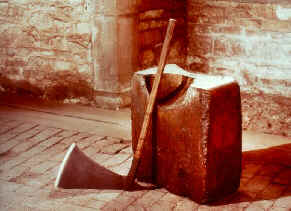 On June 30, 1540, a blacksmith’s son risen to power wrote in desperation to his king, Henry VIII of England: “I crye for mercye, mercye, mercye.” A month later, as Henry hastened to marry Catherine Howard, the fourth of his six wives, Thomas Cromwell, once chief minister and the most powerful man in the land, was executed. In a gruesome touch, Cromwell’s head was boiled and set on a spike in the Tower of London; and an inexpert butcher swung the axe for the blacksmith’s son.

This part of Thomas Cromwell’s tale is not told in Hilary Mantel’s Booker-winning, acute, Wolf Hall, set in the turbulent court of Henry VIII. Historical novels don’t need to set down the ending, since we know that part of the story already. Anne Boleyn with her catlike-yawn and beguiling tempestuousness will be beheaded; Henry VIII chose an executioner with a sharp sword, for he loved her so much he wished her to suffer little pain. Jane Seymour will be—briefly—the next Queen of England. And Cromwell, having risen further and faster than most men of his time could dream of, will be killed by his king.

What interests Mantel, one of the most ambitious and technically brilliant novelists of the day, is larger than the story, however fascinating, of long-dead kings, queens and courtiers. Wolf Hall is a study in power, acquisition and lust—always fine themes for those interested in self-improvement—with Cromwell as an alpha among the pack. “The saying comes to him, homo homini lupus, man is wolf to man.”

Cromwell’s father may have been an innkeeper or a blacksmith; Mantel chooses blacksmith for the purposes of this novel. Our first glimpse of the young Thomas is of a boy “felled, dazed, silent”, thrashed by Walter Cromwell, a commonplace occurrence in the Cromwell family. From this passage of physical violence, it’s an easy movement to the more sophisticated violence of the court, as young Cromwell climbs higher and higher. Mantel’s character list runs to five pages, and yet we feel we know them all, their entrances and exits are so well-managed.

This is familiar ground for a historical novel, but Mantel raises Wolf Hall well above the level of her competitors. If Anya Seton offered blood, guts and romance in the melodramatic Katherine and Philippa Gregory took a sideways look at the price of ambition in The Other Boleyn Girl, Mantel’s subject is the remorselessness pace of history.

Cardinal Wolsey appears by page 18, a man at the peak of his powers, a successful summitteer on the slopes of ambition, easy in his skin “like a leopard settling into a warm spot”. Less than forty pages later, Wolsey is deposed, his riches scattered, humbled enough to cry as an impassive Cromwell looks on, learning the lessons of power, and the loss of it. Over the next six hundred pages, Anne Boleyn’s ambition and control over the king will flash into vivid life. Mantel exercises supreme control over her material, letting the reader know what lies ahead with brutal clarity rather than appealing to our sense of pathos.

Here is Anne, three hundred pages before she rests her slender neck on the chopping block, contemptuously holding up a piece of paper found in the bed where she makes just enough love to Henry to drive the king insane in his quest for more: “The central figure is the king. .. On either side of him is a woman; the one on the left has no head. ‘That’s the queen,’ she says. ‘Katherine. And that’s me.’ She laughs. ‘Anne sans tete.’”

Mantel is unusual among historical novelists for her understanding of the past—which is to say that she understands that for the Tudors, their times were modern, contemporary. The courts of the Tudors, with their rich tapestries; the oaths of the day; the casual brutality with which a crowd will attend the burning of an old woman, a Loller, and then stove her burned skull and bones in with an iron bar for entertainment; all of these are described with the eyes of a traveller of the period, not from the perspective of a novelist looking back at the past.

Wolf Hall itself, the home of Jane Seymour and her family, is never visited, often evoked, but it is just the right brooding, forbidding presence for this book. In her previous work, Mantel has examined history with a merciless clarity—whether it’s through a memoir like Giving Up The Ghost, or through the story of a turn-of-the-millennium medium with her own posse of ghosts in Beyond Black. Wolf Hall shows the same pitiless curiosity, married to Mantel’s vivid imagination. It’s a great place to start for those who haven’t encountered her work. If man is wolf to man, Mantel’s the silent presence recording everything, loping alongside the pack.