(For The Wildings website, go here; to order a copy, go here.)

What the reviewers say:

Canada and the US:

“With remarkable skill, Roy brings these characters to life in all their feline glory: They are not human characters written as cats but actual cat characters, down to their mannerisms and thought processes. I had absolutely no trouble accepting them because the writing was so effortless, and Roy doesn’t shy away from the inherent humor in treating cats as people: I was sold from the moment she used the word “all-cats-bulletin” on page five.”

“One of the joys of this novel is Roy’s intricately imagined animal, avian, even insect society – a community that lives alongside but not as part of the bumbling, oblivious Bigfeet (that’s us). An ode to New Delhi and a thrilling adventure to boot…”

“Roy’s obvious love of these creatures has produced a vivid world while warning of the dangers of isolation and fear. The Wildings is a novel that can seduce even those most indifferent to cats.”

“Roy has created an immersive world of scents and sounds—we feel the corrugated steel roofs under paws, learn the best places to stay dry in a monsoon. The sleek queens, brawling toms and tail-chasing kittens live by a feline moral code, and you can feel their claws unsheath at the thought of the human world plotting their destruction.

The central conflict here, though, is cat on cat. The narrative pits the upstanding ferals against indoor cats—the violent joys of freedom against cushy confinement.”

“A few pages into Nilanjana Roy’s The Wildings, you’ll wish you had whiskers and could mew. The world as imagined by Roy in this remarkable debut is filled with marvels, not the least of which is the feline social media network which makes Twitter look witheringly banal. Roy is a cat-, cheel-, mouse- and mongoose-whisperer and this is the animals’ story, unhampered by human interference.”

“This is a warm, imaginative and well-paced book. It is superbly produced too, with Prabha Mallya’s lovely illustrations sharing page-space with text, or even (as with two small butterflies watched by an enthralled Mara, or a swooping cheel with his wings spread out) weaving amidst the words. Both writing and drawings pay tender attention to the many elements of the natural world. Though the cats are the main characters, many other creatures move in and out of the narrative: three zoo tigers and a langur whom Mara befriends during her virtual wanderings; a stately mongoose who speaks the generic tongue Junglee, which all animals can understand; an Alsatian pup mistreated by his human owners; warblers and squirrels, bats and mice.”

“Roy’s style has the even, unfaltering omniscience of a master narrator with a deliberately underscored presence, and the book should appeal equally to adults, older children, and readers of fantasy and adventure and well as the category known as literary fiction. Shining through, however, is her wonderment at her subjects, a wonderment lovingly conveyed in the way they are etched. The Wildings is above all a love paean to cats; that it also happens to be a marvelously-spun novel that could well become a classic in its own time is almost secondary.”

“The book weaves a fast-moving plot. Like all good literature, its scope is universal, an allegory that explores hunger, survival, parenting and freedom. This world will remain invisible to readers unless they tap into their noble inner cattiness—a big ask for some adults. It is also possible that some nuances of the tale may elude younger readers. But Roy’s achievement is intense. She has looked so carefully at the feline world, at the way they wash and move and speak, that the reader’s idea of cats will be altered forever. More importantly, The Wildings is the creation of a fully formed imaginative world that carries great allegorical resonance. Roy is, in essence, a moralist.”

“If a debut novel can be equated with a cat’s first kill, The Wildings is as perfect a strike as Mara’s. Gripping, humorous and truly immersive, it is well worth a sequel.”

“The Wildings is an epic tale of cats. It’s a fantasy written by a person who loves cats, and has observed them quite closely. She invites you to empathise with her characters.
There’s a scrawny cat who often hides herself behind the flowerpots in our small patch of green. She has an eye on the birds visiting my birdbath. I used to shoo her off; now I just let her be.”

“The thing about reading The Wildings is that if you have cats (or a cat), it doesn’t take long for you to spot them somewhere in the pages. And if you don’t have one, then you are likely to concede that Nilanjana Roy has made a cat lover out of you. Roy draws you into a cat’s world — not a world of cats — and she does it without any superciliousness (a failing that cats are often, erroneously, accused of).”

“Nilanjana Roy’s The Wildings is as much a modern fable as it is a floor-level point of view of cosmopolis,largely through the eyes of cats. Roy “spent most of her adult life writing about humans before realising that animals were much more fun”. The writing itself is cleverly feline and engaging. The tales’ strength and narrative drive urges the reader on, compelling one to go on with the shadowy hovering of cats tailing you to move forward, sure-footedly—and this at the arc-looped behest of a skilled writer’s cadenced baton. The dialogues are well handled and convincing, a task many novelists find hard to get pitch-perfect.”

“It is a novel for all seasons and ages… Nilanjana Roy has created a savage, dangerous world parallel to our limited, self-centred human one. It is a world of heightened senses and myriad species, a world that seems tangibly real… Roy has her readers on the edge of their seats, their disbelief perfectly suspended, as they travel through the many perils of the plot. Fear and friendship, predators and prey are deftly portrayed.”

Best known amongst littérateurs for her blogging, Nilanjana Roy seems an unlikely candidate to wrest the mantle of cat-based artistic accomplishment from YouTube. With The Wildings she has scored one for books. A prolific columnist and editor but a first-time author, Roy has given us a hair-raising read that wears its print proudly: an entrancing fable in the tradition of The Rats of N.I.M.H. and Watership Down.

“Journalist Nilanjana Roy sets herself a tough task in her debut novel The Wildings, which starts out to be a grownup book about animals, with splashes of heroic fantasy, traces of sci-fi, and yet an adventure for all ages… [Prabha Mallya’s] gorgeous pictures provide tantalising suggestions of what a different book this could have been, perhaps with reduced text and a co-authorship for the illustrator.”

Bloglove: (from, most appropriately, a Manxcat)

Somehow, I knew that Beraal was going to make an impact on me. A feisty young queen, she oozed charm, grandeur and strength. And tis a cat we talk about! Wildly engaging and foxy, “The Wildings” by Nilanjana Roy. She’s named the book rightly so and has created a band of characters with such mystique, you immediately become attached.

I have said it before and I will say it again: If you love cats or animals or own cats or pets, then, “The Wildings” by Nilanjana Roy will be a perfect read for you. Even if you don’t own pets, it will.

From professional photographer Naina Redhu, a book review in pictures.

“Right from the word go, I was sucked into the world of Katar, the confident leader , Beraal, the beautiful, agile queen, Southpaw, the cutie kitten always getting into trouble and Mara, the orange kitten, the anomaly … the devilish Datura…Tooth, the cheel… I could go on and on. The world is viewed through the eyes of these cats where all people are the “Bigfeet”. As the cats roam and hunt and laze around; the streets of Nizamuddin Dargah in Delhi come alive. There are endearing moments, humorous moments and nail-biting moments- I don’t ask for more in a book.”

“Nilanjana Roy earns her stripes with her very first novel ‘The Wildings’.”

“Roy manages to nail the connect between character and reader. She fires sure shot after sure shot, with her gun firmly on the shoulders of her furry protagonists. They are compelling and as real as a character that’s not human can be.”

The kitten took a big breath. “It is my Bigfoot — she’s called Nilanjana, by the way,” she finally said, “I heard her say she is writing about us in a book.” “Impossible,” Beraal spat, “you must stop it immediately. Your Bigfoot once wrote a column – that is something they post because they can’t speak Junglee,” she explained to Southpaw – “that led to other Bigfeet messing about our affairs for weeks. No,” she hissed, arching her back “it must be stopped.”
Qawwali turned to address the cats, “I heard it on the Junglee web that the last time a Bigfoot called J K Rowling wrote about our kind, it caused so much interest in the animal kingdom that the unicorns went into hiding and haven’t been seen since.”

Reviews from foreign editions of The Wildings 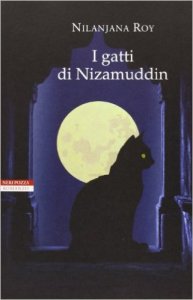