“The two of us loved books and reading and authors for no good reason except that it had been encoded in our DNA by the previous generations, because we had lived in homes where everyone read books, as a matter of course. My father had grown up in a small town with a tiny library; in later years, he bought books expansively, with the same joy of the forbidden that was reserved for things like expensive, imported chocolates.

Collecting books is the same as looking up at the stars: you don’t want to own the stars, any more than you want to own books or the knowledge in them. All you hope to do is to brush the surface of wonder, to acknowledge that there is still, as an adult, some part of you that is always in awe of, and love with, the world and the word.”

About The Girl Who Ate Books:

“From Bankimchandra Chatterjee to G.V. Desani to Vikram Seth, Indian writing in English has come a long way over the last hundred years. And Nilanjana Roy – voracious eater of books and sharpest of critics – has taken stock of it all. One of India’s most widely read journalists, Roy has been writing reviews, columns, essays and features for over two decades. The Girl Who Ate Books revisits the best of these occasional pieces and weaves them together with a set of new personal essays. From early memories of living in a house made of books to encounters with men and women who hoarded books to the author’s first taste of the printed word, this is a memoir of reading, loving and living with books like no other. Bringing together writers across generations – from the obscure Sake Dean Mahomet to the mischievous Khushwant Singh to the fiery Arundhati Roy – The Girl Who Ate Books gives us a ringside view of the theatre of Indian writing in English over several decades, and especially the last two. Written in the author’s understated but unfailingly elegant style, this is an essential collection for those who live to read and read to live.”

The Girl Who Ate Books at HarperCollins; at Amazon.com; at Amazon.in; at Goodreads.

Finding Dean and the Gang 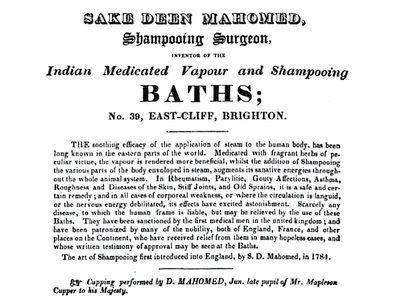 Ambitious to walk into this world though he was a rank outsider in England, and assuming that he could make a dent in it, Dean Mahomet over-reached himself. And yet, everything about his writing exudes confidence, from his careful but offhand inclusion in it of his own climb up the ranks of the Indian army, to the cheerful way in which he unpacks the mystic East. He laid down his chapters in the way a Kashmiri merchant unrolls his carpets, spreading out the wonders, the colourful patterns, the ancient weaves, and there is no doubt what he intended to do in London.

The Hindostanee Coffee House failed well; it was, by accident or design, the first Indian curry-house in London, and I felt a sudden stab of renewed fondness for Dean Mahomet when I saw its little plaque at George Street. It may have been too much to ask, even of a man of his charm and obvious salesmanship, to establish a rival to the great coffee houses of the time. Michael Fisher, who wrote a preface and an introduction to a 1997 edition of Travels, records Mahomet’s sad advertisement, placed in the papers after his venture ran aground, in 1811:

MAHOMED, late of HINDOSTANEE Coffee House, WANTS a SITUATION, as BUTLER, in a Gentleman’s Family, or as Valet to a Single Gentleman.

But, by 1814, he and his wife, Jane, had shifted to Bath, and taken up jobs as bathhouse keepers. And, by 1838, he had established himself as a kind of superior spa-owner in Brighton.

He published only one other thing, and that was a pamphlet: Shampooing, or Benefits Resulting from the Use of Indian Medicated Vapour Bath, as introduced into this country by S.D. Mahomed (A Native of India). The bulk of the pamphlet is given over to testimonials from grateful clients cured of lumbago, nervous disorders, gouty affection and contraction, torpid livers, and, in the case of Mr Phillips, comedian, of loss of voice and violent hoarseness.

These testimonials were enlivened by odes to “Mahomed, The Brighton Shampooing Surgeon,” written by Mrs Kent and others. It was dreadful poetry—“O thou dark sage, whose vapour bath/ Makes muscular as his of Gath/ Limbs erst relaxed and limber”—but the odes, and letters, testify to Mahomet’s remarkable genius for marketing himself, as a writer or as an introducer of Indian massage techniques. (Shampoo, at that time, was a reference to champi, a massage, rather than head-baths.)

I imagine him, content with his Irish wife, rising up through the world of Bath, getting to know the gentry with the same ease with which he appealed to his British patrons in the introduction to his memoirs, making himself indispensable. His shampooing salons promised novelty, gossip and wholesomeness, the same three qualities easily discernible in his memoirs.

The salons were enormous, as elaborate as a Hindi film set, and as gorgeously baroque. They took the English idea of taking the waters to a sybaritic, exotic, glamorously Oriental extreme. And they fulfilled a small part of the dream he’d had when he started his coffee house. The Brighton Gazette recorded that ladies would make appointments to meet at Dean Mahomet’s salon, and would “often pass seven or eight hours together in the carpeted salon, telling stories, eating sweetmeats.”

Read the rest: Finding Dean and the Gang

The Baba Yaga in the Back Garden 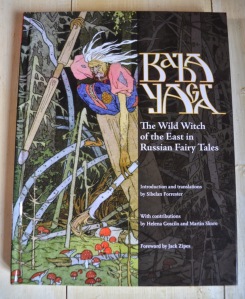 I lost my fear of the Baba Yaga gradually but surely.

It was replaced by something that I was too young to recognise as envy. The Yaga was wise, if curmudgeonly, but it seemed to me that anyone would be short of temper if uninvited princesses and Vasilisas insisted on dropping in without notice. She had her own property in the shape of a mobile hut; her own high-speed, very cool transport.

She was not afraid of displaying her wrath or behaving badly, or eating the odd annoying person, all qualities that I secretly envied because I was so often told that displaying your anger and having tantrums were not ladylike things to do. I did not want to be ladylike at all, but between the nuns at my convent school and a battalion of aunts, it was thrust upon me.

The Yaga fascinated me. She had wisdom, which is distinct from intelligence, and she drew her formidable power from sources other than youth, beauty or charm, which made her a quirky role model for a young girl.

Read the rest: The Baba Yaga in the Back Garden

Pictures at an Exhibition

“…The divide between our worldviews was beginning to open up. The women were growing heated, and now they had begun to grab at us, holding our arms, clutching at my waist, so that they could make their arguments. “You should leave,” the woman police officer said quietly to me. “They are getting angry.” But we were finally talking. It seemed wrong to leave now.

Two women, younger than the rest, waved away the ideological arguments. Could I understand – could we understand – that they felt ashamed and threatened by the idea of nude paintings? What did I mean, when I said the female body was neither shameful nor to be feared? Was I not upset at the thought of men looking at naked women in the gallery, and then outside? Why, they asked again, did I think bodies were beautiful?

The man cut them off. That was not the point, he said flatly, and they stepped back. The point was that these disgusting, shameful works were being displayed in the open market. It was their duty to stop people from seeing them.

But, I said, talking past him to the women, even though I thought there was no shame in the sight of the human body, and I did not think the female body was sinful in itself, I understood that they felt otherwise. We disagreed, and that was all right. So they should tell their families and friends not to see this show. Why stop us, who felt differently, why take away our right to see what we wanted to see?”

Read the rest: Pictures at an Exhibition

What the Critics Say:

“Infused with intelligence and lucidity, Nilanjana’s style is calmly reasonable and enviably engaging. The writing is unifor­mly informed by a quiet but insistent passion—for books, writers, rea­­d­ing and other book-lov­ers—nonetheless moving for the softness with which it insinuates itself upon the reader. The most engrossing pieces, however, are those that are personal.”

Why you must eat Nilanjana Roy’s new book

“This book is a perfect antidote to the age of distractions. In a fell sweep it reminds you of that distant country, the past, when hours were measured in books, and there was nothing – but nothing – in the long afternoons, between your sweaty school-returned self and the insinuations of adult futures, with worries and whatnots, only you, a book (sometimes, a Russian book with characters called Vasily or Ninochka; sometimes, Enid Blyton; sometimes, Saradindu Banerjee)… I would heartily recommend you eat this book.”

Abhijit Gupta in The Indian Express, May 2016

“The Girl Who Ate Books is a book about books, ramifying over a nearly two-century history of writing in India, primarily in the English language. Culled from Roy’s columns for over two decades, the essays constitute a virtual Who’s Who of the world of Indian English letters. Seven sections, mixed and shaken with personal reminiscences of reading and book-love, deliver a book infused with delicate remembrances of books and readings past.”

That a Bengali should write a book titled The Girl Who Ate Books seems like the most natural thing to do. Bengalis, after all, eat everything.