“Over the years, the other three cats—Mara, Tiglath and Lola—had shown us how easy it is to cross the divide between animal and human. Attentiveness and empathy bridges most communication gaps. This turned out to be applicable to many other species, from elephants and stray dogs to dolphins, frogs and mongooses.

But Bathsheba teaches me respect for the distance between humans and other animals. Spending time with her, I have understood that she has her own particular, intense loves, joys and sorrows.” 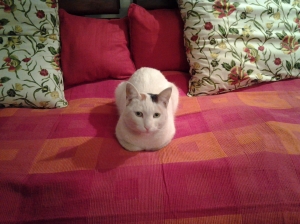 Read the rest of Stray Cat Blues at Mint Lounge

“Big Magic is immensely useful, even radical in its determined insistence that your work should bring you and others joy. Before she wrote Eat, Pray, Love, Ms Gilbert had written a novel, a short story collection, a biography – all praised, none of them successful enough to allow her to quit her day job. So much of her overnight success turns out to have been years of hard work. I like her all the more for not insisting that it was hard: she loved doing it, and she persuades you that this is how it should be.”

Gitta Sereny: The difficulty of evil

“To most of us, the line that separates the monsters of this world – the baby killers, the Nazi commandants – is sharply demarcated, as though there was an actual frontier between us and them. The great lesson of Gitta Sereny’s writing was the understanding that this barrier was the flimsiest of curtains.”

From ‘Unseen Food’, an essay written for Mita Kapur’s anthology, Chillies and Porridge:

“It is growing harder and harder for me to nail down ‘Indian food’ in any way. Some of the not-seeing is common to those who live in cities and have lost touch with the seasons of growing, or do not know the alphabet of edible plants (or insects and small molluscs, for that matter).

Some of the food that is never talked of as ‘Indian’ is excluded because of deep, and disturbing, biases in favour of the mainland and the mainstream; in some cases, for both vegetarian and non-vegetarian, community taboos mask larger insecurities, angers and fears. And when you begin to add in the food and plant varieties brought in by travellers who came and settled here, asking what ‘authentic’ Indian food might be feels like an absurd project: authentic in which century, for which community?” – See more at: Mint Lounge 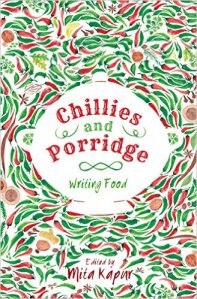 Find Chillies and Porridge on Amazon.in

“The kitchen stood revealed as a cross-cultural minefield. The antique Italian peppermill, a gift handed down by my mother-in-law, used by her mother in the days when the possession of such an item conveyed an aura of world citizenship on the user, is employed in our house to grind saunf and roasted jeera. The silver salad set and the silver toast rack we received as wedding presents are forlorn white elephants: there is no butler to polish them, I prefer wooden salad sets anyway, and we are a toast-averse household.”

From ‘In The Flesh’:

“The goat—properly a kid—trots in eagerly, escorted in by two soldiers with very young faces and very old eyes. It bleats; off in the distance, other goats answer. It is very interested in the wooden structure—two poles decorated with garlands of leaves and flowers, and it tries to eat some of the flowers, as a burly man in uniform tests the blade of a long, curving knife, crouched down beside the kid.
It is only when the soldiers pull on the rope around its thin neck and force its head down onto the crescent-shaped piece of wood connecting the two poles that the kid starts to protest. It bleats, and the answering, distant bleats are more frantic.”

“The cruelty of the villagers, and of Saroja’s mother-in-law Marayi, is casually relentless; the dislike of an interloper, the implacable determination to cast out the outsider is so well portrayed that the reader shrinks a little inside her skin, along with the bride. The village’s insistence on purity outweighs humanity; and yet, Pyre is a love story, too, and Murugan writes with a gentle, sensual tenderness that is unforgettable.”

“As a general aside, here is a truth about novels that centre on the home – both sexes write them, but it’s only when women tackle this territory that they are belittled for being too domestic, too narrow, too safe in their ambitions. And yet, writers (of all gender orientations) who tackle “home” know what rich quicksand this is: home is where humanity goes to be itself, with all the yearning, the ferment, the danger, the joys, the irrevocable mistakes, the risks and the unvarnished truths that accompany “being yourself”.

Vivek Shanbhag’s Ghachar, Ghochar runs to just 115 pages, but it’s one of those novels that are bigger on the inside than on the outside.”

“You meet the strangest people in the most unexpected circumstances,” he says, if you’re willing to listen to their stories.”

The Hazards of Journalism, for PEN International

“But I am often reminded that there are worse risks besides the risk of censorship or of blinkered reporting. The most vulnerable of India’s journalists remain those reporting in parts of the country away from the relatively protective spotlight of media attention, or from conflict zones. – See more at: http://www.pen-international.org/nilanjana-roy-the-hazards-of-journalism/#sthash.S3n1REQF.dpuf

From France To India, Charlie Hebdo reminds us of the real promise of free speech

“As my student friend waits to hear who will be murdered next, each successive killing – carried out so openly, with such impunity – freezes more tongues, exiles more bloggers, silences the doubters.”
See more at: http://www.aljazeera.com/indepth/opinion/2015/08/hit-list-endangered-bloggers-bangladesh-150813132059771.html

How India’s writers are fighting intolerance

“Over the next few weeks, the writers’ protest went from a trickle to a river of discontent, led by veterans and members of India’s youth generation alike, representing languages from Kannada, Punjabi, Hindi and Kashmiri, to Oriya, English, Malayalam, Urdu and Gujarati.”

What passes for sedition in India

“By the 1980s, the Indian women’s movement – massive, diverse, made up of groups with very distinct concerns – had begun to grapple with the relative absence of their own written histories. “There was so much published in the West,” Urvashi says. “It was a comfort to have that, but it didn’t explain what we were confronting on the ground.” When they explored dowry killings, for instance, they began to see how these demands and deaths served a functional purpose: they were a way for Indian families to get the capital needed for small businesses, white goods, and home expansions.

Did dowry affect only Hindus, was the practice restricted to the north of India, was it a middle-class phenomenon? The answers were complicated. When families declared that the giving and taking of dowry was voluntary, it raised thorny issues around agency. “We had always seen agency as desirable, but what if women used their agency to demand or enforce violence towards other women?”

Urvashi began to talk about starting her own publishing house: “We needed answers to these questions. The books grew out of this need to collect our own history.” 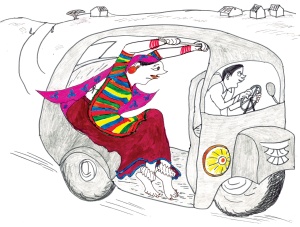 “The women in Picture This! are sketched in brilliant splashes of colour, bringing back the familiar image of the Gujarat and the nearby Rajasthan countryside: the desert’s sandy browns and greys are lit up by the exuberant yellows, greens, reds and pinks of the long-skirted women. But what I love most is the expressions on their faces. Garva draws each one from memory, and they radiate mischief, intelligence, friendship, determination, scepticism, individuality.

Radhaben herself is also present in the pictures, bespectacled, peering with friendly interest at the reader, neat in her green sari and the magenta blouse. If only all artists would sign their work with such self-portraits, looking out at the world that looks back at them.

The many Indias in between

Chandni, and other invisible women

The freedom not to marry

The crisis in our community: on violence

(The Business Standard weekly columns on books, freedom of expression issues and Indian writing in translation are archived here: http://www.business-standard.com/author/search/keyword/nilanjana-s-roy)