Our Freedoms: an anthology of stories, essays and poems on liberty 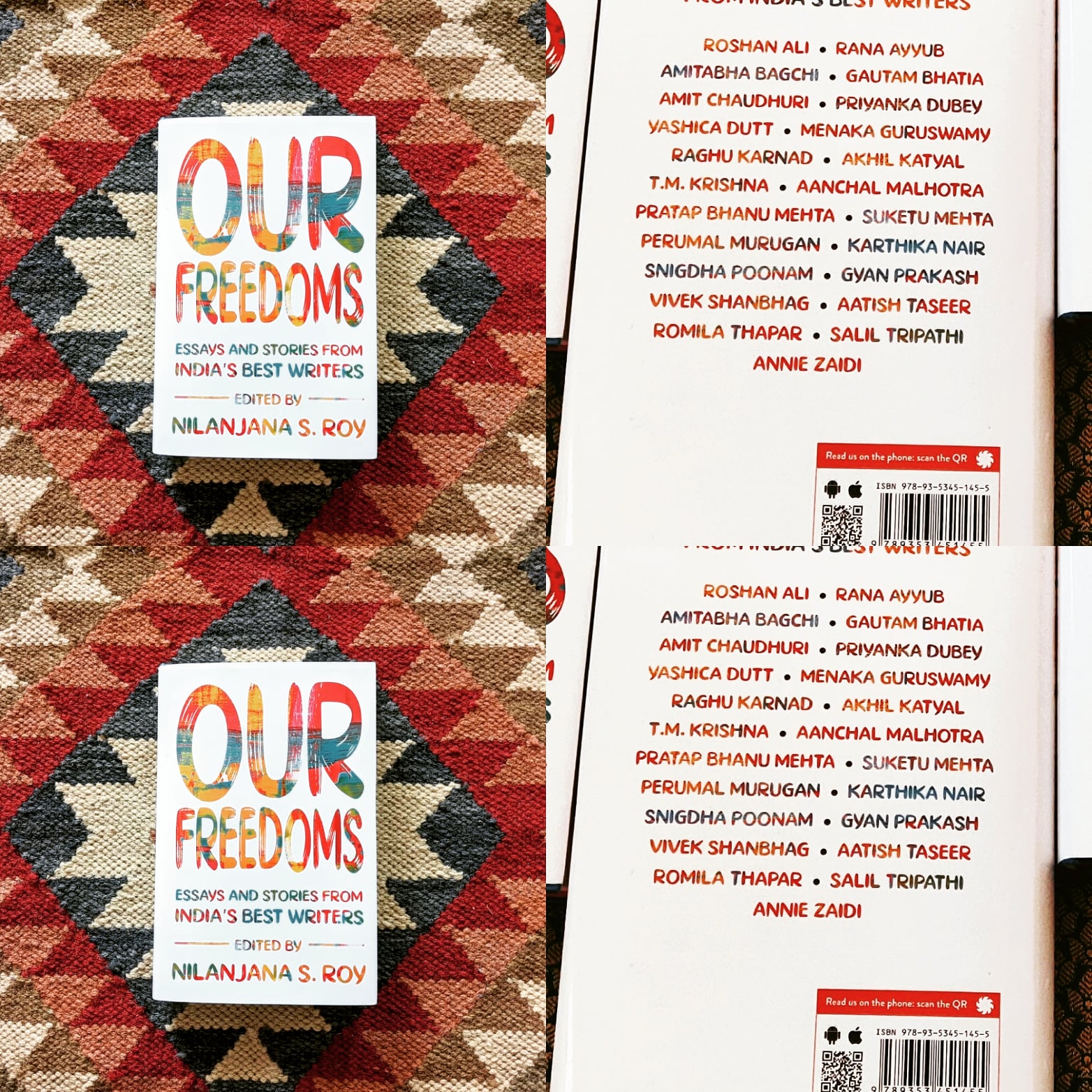 Buy Our Freedoms at Juggernaut

“With the idea of freedom becoming a distant memory with each passing day, it is difficult to describe the tenor of disquieting times like this. The recently-published anthology Our Freedoms does just that while amplifying voices that hope to make India’s constitutional morality unfailingly stronger.

Edited by columnist Nilanjana S. Roy, the book – an amalgam of history, compassion, defiance and hope – explores a multitude of themes encompassing the idea of freedom, something India gained from the British colonialists but failed to ensure to its citizens in the postcolonial period. The book is about the politics of religion, caste and gender; the language of dissent; the limits of free expression; and challenges to constitutional democracy and secularism.”

~ Kalrav Joshi in The Wire

“With writers like Priyanka Dubey, Yashica Dutt, Gautam Bhatia, Aanchal Malhotra, Perumal Murugan, Vivek Shanbhag, Aatish Taseer, Annie Zaidi, Raghu Karnad, Akhil Katyal, Karthika Nair, Roshan Ali, Amit Chaudhari, Salil Tripathi, Suketu Mehta, Rana Ayyub, Snigdha Poonam, T.M.Krishna, Gyan Prakash, Menaka Guruswamy, Pratap Bhanu Prasad, Romila Thapar, Amitabha Bagchi,   – some of whom I’ve read earlier, others on my wishlist, I knew this was a book I just had to read… And from there begins the sometimes heart-breaking, sometimes infuriating, sometimes hope-inducing read that this book is. Many of the lines from this book were a reflection of my thoughts and ideals. Many lines were a reflection of the questions I had been asking but had no one to answer them. Many lines from the different essays by, what the book claims and I strongly agree with, India’s best writers had me nodding in agreement.”


“Writing can show a path to future generations. It can give something to hold on to. It’s the hope that all is not lost that I write, and the warmth that the written word provides that I go back to reading. And in reading the stories and essays from Our Freedoms: Essays and Stories from India’s Best Writers (Juggernaut, 2020), edited by Nilanjana S. Roy, I felt the same sense of warmth. These writings convince me that, in any situation, words have within them the elixir to transform and inspire even the one who may feel bereft of any agency to function in this brutal world.”

Read selections from Our Freedoms:

“When the Congress Radio began broadcasting in August 1942, it was with the intention of telling people what was actually happening. And so it began.

At exactly 7.30 p.m., Mehta announced, ‘This is the Congress Radio calling on 42.34 metres from somewhere in India.’

Correspondence between the Bombay station director of AIR and the Government of India’s home department shows that the government became aware of the clandestine station on Sunday, 16 August, just three days after it was launched.

It was not easy to remain hidden from the police. Claiming to be recorded from somewhere in India, the workers of the Congress Radio were careful to change their addresses very often, moving from flat to flat, often in the middle of the night. Code names were given for the key Congress members: Sucheta Kriplani, in charge of the Bombay Congress office, was known as Bahanji; Dr Ram Manohar Lohia as doctor; Achyut Patwardhan, founder of the Socialist Party of India, as Kusum.“

“These are Tarangini’s status updates – peeves me and those like me. It is so tedious to decode her lines. Even when you feel you’ve understood, what you have arrived at isn’t more than the meaning you’ve ascribed. Only she can say what any of it really means. From the responses that are posted, it is evident that many who follow her spend sleepless nights on these intriguing lines. You can see the questions, threats, barbs, likes, abuses…well, she responds to none.”

“What can we say or write in such an environment? If we speak of only those ideas that have popular acceptance in our society, no problem is likely to arise. If we speak or write against the grain, cases will leap at us, threats of violence will hail down and there may be actual violence. The limits of freedom now are exactly as they were in the past. We can say that only their form has changed, or they have shrunk even further.”

~ Perumal Murugan, The Limits of Freedom