The firm of Kundoo & Chatterjee, of Cornwallis Street, Calcutta, did a brisk trade in “Swadeshi Essence” in the 1920s.

They offered essence of moharaja bukul, moharaja dildaria (“it really makes mind cheerful”), motia, chameli, white rose, cherry and Indian Bouquet: “It is in no way inferior to the Foreign Cashmere Bouquet and is long-lasting.” For a mere 10 annas, those of nationalist views could buy a phial of scent of true, Made in India freedom. 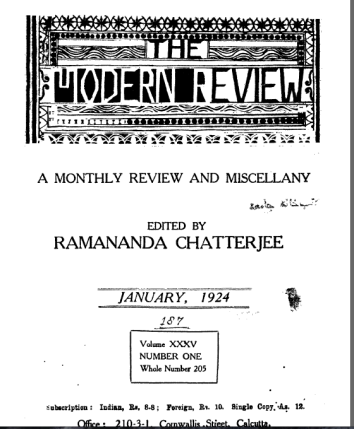 Their advertisement appears in the pages of The Modern Review, a periodical started by Ramananda Chatterjee in 1907 that began by promoting Home Rule, saw India through to Independence, and finally shut shop in the 1960s. I spent the last year reading The Modern Review‘s massive archives – on average, 1,600 pages of the magazine produced each year in 12 volumes – for a personal project.

The nature of this kind of reading is seductively digressive. An editorial in The Modern Review mentioned its sister-paper, Prabasi, published in Bengali, and I slipped gladly down that rabbit-hole. Another piece spoke of The Hindustan Review; I found stirring poems and rousing editorials in its pages, and a mention of the Indian Social Reformer, which Ramachandra Guha has written about. 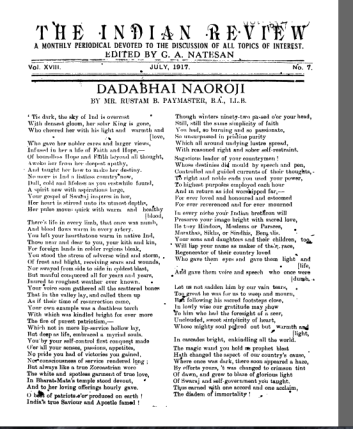 The Indian Social Reformer, “issued every Sunday morning”, from its Hornsby Road offices in Fort, Bombay, had a sharp view on the world. It led me back to The Mahratta and The Servant of India, both published from Poona, the Leader, popular in Lucknow, Tilak’s Kesari, C R Das’s Forward and so on. The Hindustan Review, edited by Sachchidananda Sinha, Bar-At-Law, had as its motto: “Too much must not be demanded of any editor” – The Rt Hon Augustine Birrell, K C, M P.

As a rule, the local language journals were far more outspoken than their English language counterparts. At the end of some months of reading, I am convinced of two things: that nothing could benefit this generation of Indians more than time spent reading the opinions, skirmishes, and friendly debates, of that generation of freedom fighters that were represented in these journals, and two, that this is unlikely to happen.

The journals of that time were not perfect. To get to the good stuff, readers have to wade through pompous prose, unstoppable floods of bad poetry, over-long essays and the like. But there were also gems, and unexpectedly moving or insightful pieces.

Many of the urgent issues that Indians face today are mirrored in the pages of the papers of the past: rising communalism, the ugly sweep and force of rumour that fuelled action by mobs, the fear that the ruling powers would grow more illiberal, the state’s over-eagerness to declare the nationalists terrorists, or communists.

All these woes were set against an unstoppable hope for the future. The many disparate voices among the nationalists were united by their urgent desire for equality between all Indians, of all communities, and many argued for a dismantling of caste too.

This outpouring of thought makes it so clear that the leaders of that generation had a deep respect for rational argument. They often disagreed, with heat, with respect. They exchanged letters endlessly, Tagore writing to Andrews; Andrews to Patel; Gandhi and Tagore disagreeing over swaraj in the Modern Review and Young India as Guha has documented; Bose sending dispatches from Europe as he shaped the INA. There is a difference between reading historical accounts and the original pieces, as they were published in journals of the day.

The journals sanitise little – the Congress’s history is much larger than just Nehru’s life, the Hindutva parties’ woeful track record on communalism and their lack of participation in the freedom movement is glaring, the Left’s denial of the giant failures and tyrannies of communism is equally stark. Few politicians today are brave enough to encourage a close reading of the archives.

It is a pity, because the past has much to teach us. In 1917, Ramananda Chatterjee wrote in the Review of the state of affairs. Indians had been deported during the Swadeshi agitations, interned during the war for no good reason, died in jail, subjected to house-searches.

“There was a feeling of great insecurity in the public mind, nobody knowing whose turn it would next be to be deported.… But, though the relatives and intimate friends of the men deprived of their liberty keenly feel for their buffetings, there is not the same feeling of consternation, vague fear and insecurity in the public mind as there was in the days of the swadeshi agitation. Evidently, then, repression cannot now have the same deterrent effect as it had in those days.”

That pattern is etched strongly in the journals that recorded the true history of Indian freedom – authoritarian regimes inspired fear, even despair, but in time, that was replaced by an even deeper thirst for freedom. Repression rarely remains a strong deterrent for long in this country.