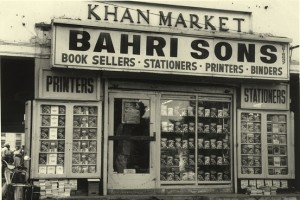 In the days when Balraj Bahri Malhotra set up Bahrisons, Khan Market was a refugee market, not the upmarket, slightly soulless South Delhi hangout it is now. Sovereign Dairies, Empire Stores, grocery shops and small mithai shops kept him company for decades before the invasion of luxury brands and smart restaurants.

Bahri died last week; he was 87. His passing signals the sunset of the era of the many booksellers across India who came over after Partition. His story is emblematic of the struggles and enterprise of that generation of refugees. He had grown up in Malakwal in undivided Punjab, and studied in Rawalpindi. He was a teenager when riots broke out ahead of August 1947. The family was one of the thousands crowded on to a train to Amritsar; they eventually found their way to Delhi and Kingsway camp.

Bahri bought the original shop in the 1950s, selling his mother’s gold bangles to raise the Rs 200 they needed to start a business, “far from the familiarity of busy Chandni Chowk, Dariba and Nai Sarak”. They did not guess, he wrote in his history of Bahrisons, “that this scheme to benefit refugees, this Khan Market, would one day become such a success”.

He took to bookselling as an offshoot of selling stationery. Every day, he took down his customers’ requests for books. At 1 p m, he shut the shop, cycled from Khan Market to Connaught Place to meet his mentor, Prem Sagar, and sourced the books he needed from the Old City. By 5.30 p m, Bahri would open for business again and stay open till 8.30 p m. His son, Anuj Bahri, keeps the shop open all day but maintains the tradition of studying his customers’ tastes in detail.

Bahri’s generation of booksellers were marked by their extraordinary patience and courage. Motilal Banarsidass Publishers (MLBD), the legendary Indology bookshop, had been set up in Lahore in 1903. Lala Motilal Jain named the shop after his eldest son. On 14 August 1947, riots struck the city and the bookshop was burned to the ground.

The family moved to India, starting over again with small shops in Patna, Varanasi and finally Delhi. Varanasi old-timers tell the story of how one of the founders of MLBD, Shantilal Jain, sold books off a wooden plank for the first few years, slowly building the business up to its present, formidable status.

The Jawahar Road bookstore in Delhi is known for its remarkable catalogue, spanning everything from religious classics to New Age popular bestsellers, and is run by the fifth generation of booksellers. Their history is echoed on a smaller scale by Bargain Bookstore in Connaught Place, a secondhand bookstore whose owners had come to Delhi in 1947 after Dera Ismail Khan was struck by violence and riots.

At the time of Partition, V G Mani’s London Book Company had 11 branches, with flagship stores in Peshawar and Islamabad. As with J Ray and Sons, a chain of bookshops run by Ram Advani’s grandfather in the North West Frontier Province, the proprietors had not anticipated the extent of the disruption that 1947 and Partition would cause in their lives. Mani closed down the London Book Co’s shops in 1947, and explored possibilities in Delhi and Bombay before opening Manney’s in Pune, where it remained one of the city’s best-loved bookstores until its closure last year.

Advani had shifted tracks from teaching to learning the book trade only in 1946, when he joined the Lahore bookstore. His family came to India after Partition, and he first started a bookstore in Shimla before shifting to Hazratganj in Lucknow, where Ram Advani Booksellers remains a city institution. In a tribute, the historian Ram Guha wrote, “Advani has more experience in the book trade than anyone in India.” Advani died this Wednesday, at 95, leaving an aching gap in the shelf of Indian bookselling history.

Ram Advani on their bookshop in Lahore and his career as a bookseller, interviewed at Leeds: https://www.leeds.ac.uk/subjectstocitizens/docs/Interview%20with%20Ram%20Advani,%20Lucknow%20Pt%201.mp3

In Khan Market, for the first time in decades, Bahrisons closed its shutters, to mourn Bahri. A day later, they were open again, and Mithilesh Singh, who has been with the shop for years, was quietly helping customers find the books they wanted. When someone asked for a book not in stock, he scribbled the title down on a pad immediately, just as Bahri and generations of the Partition-era booksellers used to do.