(Wrote Softspeakers for Antiserious, an online magazine run by Sumana Roy from Siliguri: “Antiserious is anti-spotlight: it aims to democratise serious attention from a handful of issues of ‘inter/national importance’ to everything that constitutes our dailiness, the gun and the gum.”) 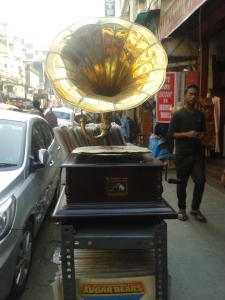 Those who lived in that city woke up late, not knowing why they felt so rested or what had brought them such an unusual sense of peace. Some woke to a sound they remembered from their childhoods, before the city had expanded and grown clamorous: the morning chorus of birdsong. Some woke to the sound of traffic, as they had for years, but the wheels of the trucks were hushed, and the car horns honked quietly, as though from a long distance away.

It was only in the evening that the citizens began to realise how great the change was in their circumstances. In the markets, a great lament rose from the tent-houses. Priests, politicians, devotees, celebrants, wedding guests (and happy couples, and their importantly busy families) found themselves baffled: none of the mikes or the loudspeakers in the city worked correctly any more.

The mikes appeared to be completely worthless, from the imported velvety-furred, red-lit mikes of the major TV channels to the humble, steel-grey versions available for hire for all kinds of functions, celebrations, festivals and meetings. The more loudly speakers shouted, the more raucously singers raised their voices, the less audible they became over even the most expensive fully-guaranteed Japanese and Korean mikes. Haranguers, demagogues, jaagaran and wedding singers, tambola announcers, campaigning candidates, preachers, teachers, all kinds of creatures: no matter how much they yelled, screamed, roared and threatened, the mikes were on strike.

By evening, a few clever and more patient speakers had discovered a workaround: if they lowered their voices, and spoke in reasonable tones, or even in whispers, they were audible. Well, they were audible as long as they held the interest of their audiences. A bored audience could drown out a tedious speaker without needing to raise its collective voice – just a general hum of rising chatter was enough to drown out the voices of rabble-rousers who weren’t rousing their rabble enough. As for the loudspeakers, they had turned into softspeakers. Though the mechanics and the electricians did their best, none of them could find a way to turn up the volume again.

In a few weeks, most of the citizens had adapted to their changed circumstances. Wedding songs continued to play, but instead of blaring the latest dance numbers across a sleepless neighbourhood, the playlists became more seductive, more lilting, vying to lure the attention of passers-by with melody instead of volume. Those who loved dancing found, to their astonishment, that their enjoyment was not curtailed.

The softspeakers did not amplify bands and singers in the same way as before, but they did, in a gentle rumbling way, make bass lines and beats more distinct, as though you were listening to the conversations of friendly dinosaurs. People flocked to discos to dance, but also to stand in long queues until their turn came to curl up against the softspeakers, where the low rumbles soothed them to sleep. It was like spa music, only less annoying.

Politicians and priests alike adjusted – grumbling – to the new order. The priests and the imams grumbled the most because they could no longer shout the word of God, and they had to hold more interesting prayers in order to bring in the devout. Politicians wondered in despair how they would hold rallies without yelling at the masses, but to their surprise, they discovered that far more crowds flocked to see them once they had shut up.

People liked watching politicians more than they liked listening to them, and the more cunning strategists put on beautiful light-and-soundless-firecracker shows, filling the city with their images picked out in glowing, gaudy, brilliant but mercifully silent holograms and billboards.

Festivals changed, too, but only a little; though pandals could no longer grab the attention of the city by its ears, they became more and more sprawling, attempting to cast giant shamianas across as much ground as possible. And they spent more on flowers and on food stalls than ever before, to attract followers, and so even though they still took up a great deal of space and time, no one minded because of the fragrance and the tasty food.

Gradually, the city’s natives grew to love their softspeakers and their whispering mikes. Many found that they were saying what they wanted to say far more often, now that they didn’t have to raise their voices or speak with force in order to be heard. Many found that their speech had lost none of its edge or wit, but that it seemed to be easier to listen as well as speak, in this city where everyone could be heard.

The only ones who hated the new order were the permanently angry and those who were full of hate. The haters had tried to start whispering campaigns, but these had been only moderately successful – you could only listen to those insidious and poisonous voices for about half an hour without wanting some diversion, and in the absence of blaring noise, other, quieter forms of entertainment had returned, from puppet shows to street singers to bioscopewallas.

Those who loved the softspeakers felt sorry for their angrier brethren, but provision was made for those who missed raising their voices. They could gather at spots outside the city limits and shout, “I hate softspeakers! I miss noise!” to their heart’s content. They could clang and clatter and quarrel, and make a ruckus, and create pandemonium for as long as they wanted, and many did, for hours and hours, and sometimes for days and days.

But every so often, one of them would stutter into silence in mid-rant, or would find himself turning down the volume on his loud, loud mike. And then when darkness fell and they thought no one was watching, they would go back to the city of softspeakers, missing the hush, the peace, the million murmuring conversations.