I loved collaborating on this — maybe there’s a natural jugalbandi between artists and photographers, maybe it’s just that the visually creative approach the world a little differently from writers, who work with the relatively more audible world of words and sentences. I wasn’t sure whether Tacla was expecting a proper essay, but his canvases were inspiring: massively layered, dense, tactile, and ominous and reassuring at the same time. So I wrote him three short-shorts. Here’s one from Rubble: Three Stories for Jorge.

It looks even prettier in Spanish! 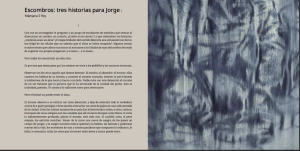 To see more of Jorge Tacla’s work: his Publications page

The Identidades Ocultas exhibition, on at the Museo de la Memoria y los Derechos Humanos, in Santiago, Chile till September 2014