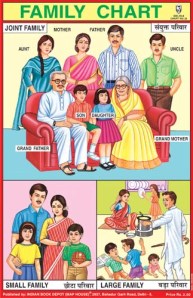 At the Chor Bazaar in Old Delhi, you used to be able to find Hindi film posters, record album art and what I classified as Readymade Families: discarded photographs gathered in shoeboxes and cardboard boxes.

In a faded pink cardboard box the colour and size of a bureaucrat’s file, I once found a set of family photographs from holidays taken over the years, in places like Srinagar, Nainital, Mount Abu. The photos were on black-and-white matte stock, lightly and carefully hand-tinted to add colour; the family a large and apparently happy one. But when the dealer and I brought the photos out for a closer look, we saw that someone had carefully scissored out one figure – whose? Impossible to tell – from each photograph. It had been neatly done, but almost all the photos were marked by the absent silhouette.

When I thought of those photographs, it was the blank silhouette I saw, not the smiling, posed people in the frame. Who was the missing figure: a loved one who had died too soon, someone who had committed terrible crimes? Perhaps it was just the work of a bored child.

So many stories lurk behind snapshots, especially the wooden, posed kind Indian families would have taken in 1979, the year the parents and two sons in Akhil Sharma’s Family Life emigrate to America. They leave on the back of many dreams, but chief among them is the father’s vision of “a West glamorous with the idea of science”. He is also propelled by self-loathing, the intolerable sense that the streets of the quiet, low-roofed Delhi of the seventies are indifferent to him. There is little to hold them in post-Emergency India, marked by the forced frugality of the era: “We saved the cotton that comes inside pill bottles. We used it to make wicks.”

In the week before Ajay and his older brother Birju leave, they are haloed by the possession – so rare in those days of circumscribed travel, the news read at slow speed on All India Radio and delivered via Inland Letter – of their US visas. Birju has more assurance than his brother; in India, he stands first in class, he likes America more than Ajay does, and makes friends more quickly.

All it takes to change their immigrant story from snapshot-perfect to something far more tragic is a dive gone wrong. Birju has an accident; and just like that, in the time that it takes to lie unseen at the bottom of a swimming pool, not breathing in oxygen for a certain number of breaths, the lives of everyone around him judder, shift and change.

The legend behind Family Life, Akhil Sharma’s remarkable second novel, says that he took 12 years to write the book, starting each draft from the first chapter on all over again, condensing thousands of pages down into a compact, heartbreaking, resonant 218 pages. But the truth might be that it took all of Mr Sharma’s four decades – he is almost 43 – to shape this semi-autobiographical story about what happens to family lives so carelessly warped and splintered by fate.

Ajay’s voice, anxious, self-aware, is perfect for the black humour that carries him and Mr Sharma through a chronicle of sadness and pain. In the hospital, he worries that his mother might judge him for not crying. “Don’t worry,” he says to her. “I’ve cried already.”

An unwanted sainthood pursues the family, bestowed on them by other Indian immigrants, but the cracks in their lives widen inexorably. Mr Sharma’s descriptions of how the New Jersey community backs away when the father eschews faith healers in favour of becoming a practising alcoholic are both brutal and true, and very funny. He finds his humour in the mixed debris of incontinence, Isocal, G-tubes and brain damage, and in the sport Ajay and his father pursue of competitive sadness: “You’re sad? I want to hang myself every day.”

Before you decide to settle for either the nearest abyss or the nearest brainless bestseller, choosing whichever seems less painful at the moment, reconsider. One of the pleasures of reading (and writing) fantasy is the restfulness of stepping into a world of magic, where dragons or wicked villains are easily identified, and where “they lived happily ever after” is an achievable ending.

But the chances that any of us will ever visit Narnia or Middle Earth are remote; the chances that we will spend time in a hospital ward ourselves, as visitors or patients, are relatively high. Those who grew up with Jimmy Rabbitte in The Commitments will be relieved to know that his cancer doesn’t prevent him from being as wily, as irreverent and as human in The Guts – he’s us, only a little bit older. Akhil Sharma takes you to hell and not quite back; Roddy Doyle explores one of our possible hereafters.

Going from Family Life to The Guts is like taking a train through an unexpectedly beautiful, if bleak, landscape, to a town you had hoped to avoid visiting. The destination may be dismaying, but the journey is extraordinary – and Mr Doyle and Mr Sharma are the best guides anyone could ask for.