Blog: Up with the stars 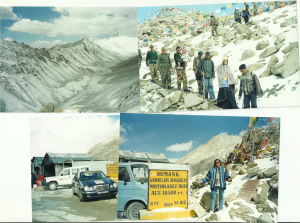 This happened on the world’s highest motorable world, back in the 2000s when so few vehicles made the long, difficult journey to Leh and Ladakh that some days we drove without seeing more than one Army truck, across the Morey Plains. It was a lonely road, and I remember that on the return journey, the passes shut one after another as our cars went through Baralacha-la and Rohtang-la, raising certain concerns that we might after all have to winter with the shepherds or drive like modern ghosts up and down between the passes until the snows melted and summer arrived.

We did not expect a traffic jam in Khardungla, a tangle of trucks and Tatras, army troops cursing so beautifully in several languages that they warmed the cold, thin air. Nor did we expect the cursing to stop abruptly, or for Manisha Koirala, stunningly beautiful in a zebra-striped cape, to make her elegant way down the mountainside. (I am the person in the large anorak grinning like an idiot; she is the one wafting among the glaciers like The Fairy Spirit of The Mountains. If you squint a little, you can tell us apart.)

The spell lasted until we found that the Autocar team had to back their car slowly down one of the iciest, highest and narrower tracks in the world, in the face of an advancing Tatra. “Peace. Quiet. Remotest place, people said,” the team’s chief driver said moodily. “No one around except for the chiru and the pheya and half the Indian army and Madame Koirala and her film crew in their blasted trucks.”

It was grindingly noisy, with the trucks and the impressive cursing, and the blaring music. But there is this to be said for being stuck in a traffic jam on the highest motorable road in the world: you can’t complain about the view, with or without La Koirala in the frame.