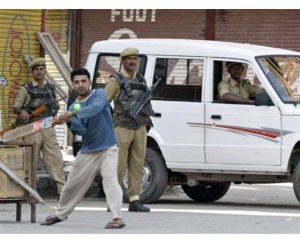 (Published in the Business Standard, February 15, 2011; image from http://www.allvoices.com, AFP.)

Around the time that Shehan Karunatilaka began writing the first notes that became Chinaman: The Legend of Pradeep Mathew, another Sri Lankan writer was defining what drove him back to the desk, one novel after another.

“In the sense that writing is to retrieve the past and stop the passing of time, all writing is about loss. It’s not nostalgia, in the sense of yearning to bring back the past, but recognition of the erosion of things as you live,” Romesh Gunesekara said in a 2007 interview. Gunesekara’s work had led him to explore the violence and the civil war in Sri Lanka in direct ways; then to move outwards, with a finely comic novel about cricket, The Match, and then back with a novel about the fragility of the environment, both external and internal, Reef.

In his first novel, Karunatilaka starts with an obsession; cricket, as seen through the eyes of an alcoholic journalist in search of a forgotten legend, Pradeep Mathew. For those who know and love the game—that would exclude all but 15 or so people in the subcontinent—Chinaman is a rare treat, brilliant in its ability to capture the nuances of the game, or to conjure up memories of test matches in an era when players wore whites rather than being mobile corporate billboards. And those with long memories will be able to match apparently fictional characters with their counterparts in real life, with considerable ease.

The difference between Karunatilaka and Gunesekara may be the difference from one generation to another; both writers grew up in a time of war, but for Karunatilaka’s generation, violence and bomb blasts were part of the environment, as they become for second-generation survivors of civil war. When blackouts and package bombs seep into Chinaman, around page 240 or so, they come in as interruptions to the journalist’s attempt to track down the missing cricketer; the announcement of the “worst terrorist attack” since 1995 in Sri Lanka is just a pause in the journalist-narrator’s intense struggle with his alcoholism.

Karunatilaka sets himself free to write about the things that matter to him, as a young novelist making his own way in the world: the perfect delivery, obsession and passion, sleaze, addiction, marriages, and writing itself. He may, as Gunesekara was, be drawn back into his country’s history in time, but Chinaman is, in a way, a declaration of independence.

Growing up in Kashmir, one of Mirza Waheed’s strongest memories was of a time when raids by the army on villages and towns had become increasingly common, routine business. At the JLF, he described the process: the informer would sit inside an army vehicle, and the boys and men of the village would be made to walk past. They had to pretend everything was normal; on one of these occasions, a man was shot by an army officer just before it was Waheed’s turn to walk past. This was also not uncommon, but as Waheed walked by, he realized that the man who had been shot was still twitching, possibly still alive. There was nothing he or the other men could do, except continue walking; the idea, he said, was to pretend that everything was normal.

The Collaborator should really have been a memoir, but that is not necessarily a criticism. Mirza Waheed’s first novel follows the story of a boy who becomes, unwillingly, a collaborator, a counter of corpses who must obey the orders of a cynical Indian army captain. The pages of The Collaborator smoulder with anger and with the narrator’s determination to tell a truth beyond anything that might be conveyed in a newspaper headline, a five-minute television clip.

Waheed’s prose is raw, deliberately unpolished as he captures the cadences of a boy who grew up in the Valley. “I saw my first dead body, before the population of dead bodies I deal with now, in that breezeless dry summer of last year… Farooq returned after three weeks. Tortured, he became a tourist site.”

The Indian army captain is a caricature, but one drawn from life; his drunken, rambling diatribes form a kind of Defence of the Realm speech. Waheed’s aim is to provide not so much a fictional reworking of the past as a thinly fictionalized testimony, the human story of the human rights abuses visited upon Kashmir in the form of a novel. That may limit The Collaborator’s appeal to some, but it does not limit its ambition.

In their starkly different ways, Chinaman and The Collaborator are books that remind us of the new generation of writers who’re coming up behind the Rushdies, Seths and Ghoshes. One book deals headfirst with a history of violence; another chooses to break with the past and write a Sri Lankan epic that rarely mentions the civil war directly. What both writers have in common is confidence and conviction.