The BS column: Rohinton and the Rat Pack 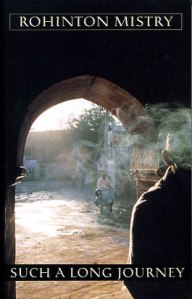 (Published in the Business Standard, October 17, 2010. This was written before The Buck Stops Here show on Rohinton Mistry and the withdrawal of his book from the Mumbai university syllabus.)

“That you say you are offended, insults me mortally. And if you insult one Rat mortally, you offend all Rats gravely. And a grave offence to all Rats is a funeral crime, a crime punishable by –” Salman Rushdie, Luka and the Fire of Life.

In the city of Mumbai, once upon a time, there lived many storytellers. Some came from the slums, and wrote angry, anguished, beautiful poetry about their lives. Some collected memories of Mumbai with loving care, and set down tales that featured the stories of the real Marathi Manoos, the ones who were Hindu but also Anglo-Indian or had names like Sinai and Pereira.

Some wrote of Firozesha Baag, chronicling the dying world of the Parsis, of ordinary men like Gustad Noble, stumbling from the tribulations of his quiet life into a larger conspiracy involving the corruption of the state, the venality and violence of its political parties. It must be remembered that at this time, Mumbai was also known as Bombay, and Bombay was a city that welcomed kahanis, opening its arms to stories and to story-tellers. Some of the best found an ocean of seas of stories here: a young man who worked in advertising called Salman Rushdie, two men who knew the slums intimately, Kiran Nagarkar and Namdeo Dhasal, a banker called Rohinton Mistry who returned to literature in Toronto, remembering and etching the Bombay he had loved so much.

Salman Rushdie spent years in darkness, at the hands of a villain much like the Khattam-Shud he wrote about in Haroun and the Sea of Stories. There were many other Khattam-Shuds in India, men who preferred “chup” to “gup”, and since Rushdie had been unwise enough to write about religion, Islam and the Koran in a book called Satanic Verses, they placed his book under a seal of the blackest silence for 23 years.
Many argued that religion should not be beyond question, and that the point of a novel was that it was made up, and that perhaps those who didn’t want to read Rushdie’s ideas might want to stop buying and burning copies of the book and just tell all their friends not to read it. But a ban hung like a shroud over Satanic Verses, and in a very strange coincidence, few great novels about controversial religious matters have come out of India in the last 23 years. This is, of course, just a coincidence, brought about by the P2C2E described in Haroun and the Sea of Stories—a Process Too Complicated To Explain.

Meanwhile, Mumbai was changing too, and becoming a city of Rats, fearsome creatures with whiskers that sniffed out the merest hint of offence, and great sharp teeth called censorship laws, and the thing about Rats is that they were very good about calling up bands of fellow Rats at need. The Rats felt strongly about the Marathi Manoos, a mythical and apparently endangered species that was threatened in Mumbai by anything that was neither pure Maharashtrian nor a Rat. The Rats felt strongly about anything that was against the spirit of their ancient culture, which is to say anything that criticized Rattery in general and Ratty politics in particular. The Rats felt very, very strongly about books that were freely available, in bookshops or in local universities, that caused offence to Rattishness.

The second thing about Rats is that they are very slow readers. Someone needs to bring a King Rat, or a Crown Prince Rat, a book worthy of burning before he will turn its pages, and the vision of Rats is such that they can only see what offends them. And so, twenty years after Mistry first set down the tale of Gustad Noble, and after it had been not just acclaimed by critics, but loved by non-Rats everywhere, a young Rat read the book. And he was shocked to discover that it offended his sensibilities, by casting aspersions on Rattish behaviour (such as corruption and mob violence and other forms of Rattery), and that it offended particular political parties. It happened to be his political party, but he explained that Political Parties, like Rats, needed to stand together against anything that might be Offensive, such as books that made people question the conduct of Political Parties known for their tendency to rule by thuggery. (Or Thuggeries, since there were three of them, a big Thuggery, a medium Thuggery and a little Thuggerish.)

It caused the Rats the greatest offence of all to discover that Such a Long Journey was being taught in Mumbai University—which, however, had a fellow Rat at its helm. It was the easiest thing in the world to organize a book-burning session followed by a book-banning session, and the niceties observed, the Rats went back to their holes.
They left us with a question, though, as Rohinton Mistry becomes the latest in a long line of authors to experience Rat censure and censorship. If Bombay turns into Rattistan, what will happen to its story-tellers? Will they leave, hustled out of the city by Rat stormtroopers? Will they end up with books written in Rattish, a new language for books that contain only blank pages, and three words: “Don’t cause offence.”

4 responses to “The BS column: Rohinton and the Rat Pack”