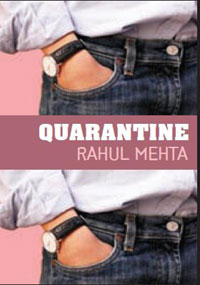 “The week I start making notes for this essay is the same week my mother is reading for the first time the manuscript for my short story collection, Quarantine…,” Rahul Mehta writes in an essay, Coming Out, just after the publication of this debut collection.

“What I didn’t say then was that I, in fact, don’t want [my parents] to read it. And now that my mother is, I am terrified. I am worried that she will object to the family stories I have stolen and altered and bent to suit my purposes. I am worried that she won’t understand what “fiction” means, and that every time she reads a passage in which a young, gay Indian-American man is having sex (and there is, in fact, a fair amount of sex in the book), that she will think it is me: me having rough sex in an alley, me masturbating in the back of the family car, me having unprotected sex in a loft in New York with a one-night stand.”

More, almost, than the nine stories in Quarantine, this essay marks the pleasures and pitfalls of Rahul Mehta’s writing. This is one of the most surprising collections I’ve read in recent months: honest, spare, moving in the tenderness with which he chronicles the fault-lines and the epiphanies of relationships, but narrow in its scope and ambitions.

The narrator is not Mehta—this is fiction, as he stresses. Though he’s a young, gay Indian-American man himself, that really isn’t him in these stories having sex, or having a nervous breakdown, or facing family conflicts, or holding down an imaginary job. But the narrator’s voice changes little through these nine stories; it’s the link, the connection the reader needs, though it offers no shift in perspective.

In ‘Floating’, a gay couple explores tourist India and returns with artifacts. These are not so much the trinkets and funny stories the narrator despises, but an unsettling encounter, a hint of violence, an anger from the local community that they are not doing their job, not buying the right commodities—sex, fake miniatures—in the right market. In ‘Yours’, Don, Antwon and the narrator circle around each other, trying on power games, trying desire on for size, rejecting the wrong fit. There are bickering gay couples, or the ones who break up over infidelity in ‘Ten Thousand Years’; there are the ones who have slid, without meaning to, from intimacy into near-marital familiarity and can’t find their way back.

Like John Cheever, Mehta is instinctively a kind of Chekov of the suburbs, drawn to the tangled and concealed histories of conventional, apparently bland families—chiefly of the Indian diaspora. Though a few stories are set in India, it’s clear that this is a country seen through a tourist’s eyes, and there’s little questioning or unnecessary tension in that relationship.

One of the most touching stories here, Citizen, is ostensibly about an elderly woman’s struggle to pass her American citizenship test; but the real theme is in the first line: “Everybody told her this is what she should want…” The degrees of disenfranchisement that interests Mehta are personal rather than political. He’s brilliant at excavating the real histories: in the title story, Quarantine, the bitterness and bad blood between the narrator’s mother and his grandfather hides the true bond between them—a mutual helplessness, a shared lack of control over their lives.

It’s rare for Mehta to falter technically, but he does in the ambitious, Carveresque ‘What We Mean’, where the protagonist’s slow breakdown is communicated through his verbal outpourings and a loss of language. It’s brilliantly done; but implausible, because the protagonist retains control over the structure of the story even as he loses control over his mind, always a danger where you’re using a first-person narrator in a situation of this kind.

More often, he’s in perfect control of his material. In ‘Ten Thousand Years’, the travelling couple buy a 1967 Malayalam phrasebook: “…filled with translations for phrases such as: ‘That’s the boy’s job,’ ‘Tell the boy to come in the morning’, ‘There is plenty of work for the boy’.” They are both horrified, but later, during a lover’s quarrel, one of them will use these phrases, as hurtfully as he can, to initiate the break-up.

Quarantine’s greatest flaw is its narrow ambition, and Mehta’s deliberately constrained range—it’s the exact opposite of the “baggy monster” school of writing, and for a certain kind of reader, the limitations won’t be a barrier. It announces Rahul Mehta as an extraordinarily astute, talented young writer, blessed with a quality not often considered literary—he has empathy, and he writes dialogue like a practised eavesdropper. It would be unfair to stereotype Quarantine as just a collection of “gay writings”, any more than John Updike’s short stories are just a collection of writings about hetero relationships, but Mehta’s lack of self-consciousness makes this a wonderful exploration of writings about gay men and different approaches to masculinity, as well as the family in general.

Over the next decade, it’ll be interesting to see whether Mehta manages to expand his range. His craft and his assurance are unquestionable, but while Quarantine is a beautiful, and often moving, read, it stops just short of being memorable. That’s a problem Mehta shares with John Cheever, and it didn’t stop Cheever from building his reputation and his audience over time.