The BS column: The lure of the local litfest 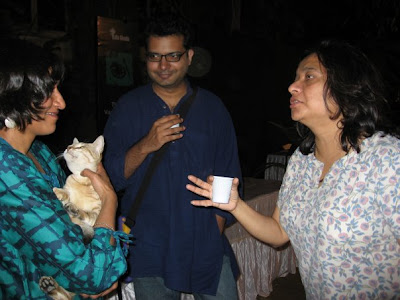 (Published in the Business Standard, February 2010; that would be the friendly Kala Ghoda cat, who had a better haircut than me at the time)

Almost the first person I run into at the David Sassoon Library at Bombay’s Kala Ghoda festival is an old schoolmate who now heads one of India’s top 100 companies. We met just a few weeks ago at the Jaipur Literature Festival.

“I’m here for the headliners,” he had said then, explaining that the JLF allowed him to maximize his (rare) holiday time by corralling Niall Ferguson, Steve Coll, Lawrence Wright and Anne Applebaum in one location. Surprised that he would be attending sessions on children’s writing, local Bombay histories and Dilip Chitre’s poetry at the much-smaller Kala Ghoda literary festival, I ask whether he comes here often. “Yes,” he says, and introduces me to three other men from the corporate world. “This might be smaller, but it’s our best chance to catch up with local writers. I’m here every year.”

Kala Ghoda is relaxing in a way that the increasingly adrenalin-fuelled JLF can no longer be. The latter offers a kind of intellectual crack cocaine; it’s exhilarating, attention-getting, but “restful” is not the word that comes to mind if you’re attending back-to-back sessions at the Diggi Palace.

Just a few years ago, Kala Ghoda’s litfest, a spinoff from the main arts and cultural festival, was one of the few decent festivals in India where readers had any chance of catching up with writers. For publishers, it was a great venue to launch new writers, or to showcase more established authors; and for Bombay writers especially, it offered a way of redressing the often-Delhicentric view of Indian writing.

This year, as with years in the past, I’m enjoying Kala Ghoda strictly as a reader—and for the abundant tamasha that spills over onto the road. You catch up with friends over a cup of chai at Jehangir or at the rather lovely Kala Ghoda café, and agree to meet after litfest sessions at the buckets—the installation of plastic baltis done by a local artist—at the beatbox guy’s gig, or at “the backside”.

This last being the backsides of the two elephants and giraffe, also an art installation, which you can locate at the front side of the iconic Kala Ghoda itself. The cats at the David Sassoon library make up for the mosquitoes, and as the evening cool settles on us, writers’ voices compete with the sound of police sirens and traffic for attention.

Many of us here—writers, publishers and readers—have come to Kala Ghoda post-Jaipur, and we find ourselves easing into the more laidback space, not lamenting the absence of the big-name international stars in the street-circus atmosphere over here. Chetan Bhagat causes a brief flurry and a slight swell in crowds when he makes a pitch in favour of writing that is accessible and that doesn’t intimidate the first-time or insecure reader. But even the Big Bhagat isn’t mobbed the way he was in Jaipur. Which leads Peter Griffin, one of the friends of the festival, to ask: “Will there still be space for festivals like Kala Ghoda?”

I ask local writer Amit Varma, fresh from his Galle Literary Festival experience, what he thinks. “Big festivals can feel a little rushed,” he says, thinking back to his visit to Jaipur as a blogger and reader some years ago. “This is a charming local festival that needn’t aspire to be a JLF: it works for local readers, local writers and serves a different purpose. At the smaller festivals, everyone is drawn together for the love of books and reading. I don’t think it needs to be either/ or: why not more Kala Ghodas? Why not a Kanpur festival, or a Vizag festival?”

Spread over nine days, what Kala Ghoda offers is a chance to drop in and pick up on a reading or writing conversation at any time; and it also offers an odd kind of continuity. Three years ago, the poet Adil Jussawalla spoke with passion about the changing ethos of Bombay; the year after him, Kiran Nagarkar picked up the thread by commenting on the rising culture of intolerance in his city, an intolerance that he felt was alien to the spirit of the city. This year, MS Sathyu departs briefly from his tribute to the late Habib Tanvir to make a point: “This is my Mumbai too. I’m Kannadiga, but I lived here and worked here for years. Cities can never belong to only one section of people.” This is the kind of continuing conversation—or heated debate—you could only have at a city festival, not at a more international festival.

We’re famous for our excess as a nation, and perhaps what we need is more, not less. The small tents at Varanasi, the local, laidback festivals in Delhi or Hyderabad or Bombay, and the big top of Jaipur: there’s room for all of them.