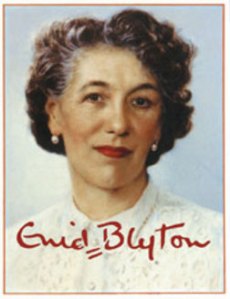 (Published in the Business Standard, December 2009)

The BBC thought she was a “mediocre…boring” writer; librarians at various times across the world have called her books sexist and racist; and over in the US, her name evokes polite puzzlement. But Enid Blyton is the only dead writer to make it to a list of bestselling authors of the last decade, joining modern-day stalwarts like Terry Pratchett and JK Rowling. And her popularity makes no sense whatsoever.

The world that Blyton described belonged to the realm of fantasy even in her day. There were few boarding schools as pleasantly idyllic as Mallory Towers; even in a much safer time, responsible parents didn’t allow their children the kind of freedom the Famous Five have as they explore islands and run off with the circus; and the England she describes is as mythical as the Faraway Tree or Toyland.

In a brilliant article for The National, writer Amy Rosenberg discovers and explores the fascination that Blyton continues to hold over her fellow writers, from Siddhartha Deb to Pankaj Mishra and Rukun Advani. And every British colony has its own reasons for the Blyton fascination—her easy-to-understand vocabulary, the pull of the exotic (muffins, midnight feasts, caravans), the insidious pleasures of being children in a world where adults are only peripheral.

In India, Blyton formed part of a strange Holy Trinity. Kay Webb’s marvellous Puffins came into the country long after the influx of books from Soviet Russia. So while there were some of us in a particular generation who graduated from Young Pioneer stories to the Wombles and the Borrowers, this was not a universal reading experience for the English-speaking generation of a certain era. The classic children’s authors of the US are available now, so my nephew reads Maurice Sendak, E B White and Frank L Baum—but again, these were precious commodities in Nehru’s India.

For Indians now in their mid-thirties-early fifties, the three authors who shaped our childhood reading more than any others were P G Wodehouse, Frank Richards and Enid Blyton. Richards’ Billy Bunter books were a marvellous example of how easy it is for children—and their parents—to overlook the politically incorrect in favour of excellent entertainment: few of us, reading his boarding-school classics, remarked on the exoticism of Hurree Jamset Ram Singh, whose accent was a constant source of comment and hilarity for Bunter and co. But then, few of us remarked on the stridently Communist propaganda of the Soviet classics; my impression is that as children, we skipped the politics and stuck with the colour.

Wodehouse still survives as a peculiarly Indian passion; but his universal popularity in the last two decades has been on the wane. (We may be the last generation to keep the Blandings flag flying, or to speak fondly of Eggs, Beans and Crumpets.) A small nostalgic segment of readers in the UK keeps his world of crumbling estates, chorus girls with hearts of gold and daft young men attended by perfect butlers alive, but he is much more celebrated in this quarter of former Empire than anywhere else in the world.

Blyton, for all her prosy moralising and blatant class-consciousness, is still read, loved and celebrated everywhere except for the US, where her books lost their moorings. This might have been because the US adheres with such fierceness to the principle of a classless society, or because much of Blyton’s appeal is too English, and too steeped in nostalgia, for the Americans.

Reading her books as an adult is a discomfiting experience. Blyton was far more intolerant of the lower classes—policemen, gypsies, domestic servants—than an E Nesbit or an Arthur Ransome, and her children protagonists share much of her smugness. The Toyland books have been dissected for the bizarre relationship between a crusty old bachelor—Big Ears—and an impressionable young protégé—Noddy, not to mention the strongly racist reaction to Gollywog. And the elves and goblins of The Faraway Tree are almost sickly-sweet, compared to the malevolent orcs and balrogs of Tolkein or the seductively bloodthirsty vampires of the Twilight series.

And perhaps that is part of Blyton’s continued appeal. Where else in children’s literature today, where issues from drug use to homelessness to abusive parents or date rape are part of the fabric of teen novels, would you find such an idyllic world? Blyton’s world contained fewer Wild Woods than a Wind in the Willows, but were much more geared to the older child’s experiences than the equally sunny world of Winnie the Pooh.

It was a world of ginger beer and potted meat sandwiches, a world where your toys could come alive with no sinister aftermath, where smugglers and spies were relatively benign creatures who wouldn’t dream of bombing the London Metro or the Taj in Bombay, and where the Faraway Tree could transport us, in a blink, to an even more magical place than boarding school.

Blyton’s world never existed. But perhaps the continued appeal of her books, down the generations, is an index of how much we wish it had—in these times almost more than in her age.