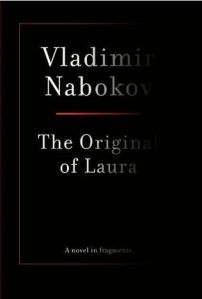 In a few weeks, Knopf will publish The Original of Laura: Fragments. The “fragments” is key. The design chosen for the final, unpublished manuscript that the late Vladimir Nabokov wanted destroyed is appropriate to the way he wrote it. The book includes reproductions of the 138 index cards on which the author, suffering from his last illness, wrote the unfinished version of the book he hoped would stand comparison with Lolita and Pale Fire.

Before his death, Vladimir Nabokov told his wife, Vera, to destroy the manuscript. He knew that the book version of Laura was incomplete, and he forbade the release of the book in this form. After the death of Vera Nabokov, it became the task of Vladimir’s son, Dmitri, to wrestle with this grievously burdensome inheritance. An author’s final wishes, especially when stated as clearly as Nabokov had, should be binding, a father’s even more so.

But there were reasons why Vera Nabokov couldn’t bring herself to carry out Vladimir’s wishes: this was his last work, however unfinished, and it would take great ruthlessness to destroy the final remnant of the writer’s legacy. The same questions must have haunted Dmitri Nabokov: did he have a duty to destroy Laura? Did he have the right to preserve Laura, for future generations of readers and Nabokov scholars?

Vera Nabokov had some precedent for her inability to comply with her husband’s last wishes: in 1950, he had attempted to destroy the index cards on which he had written Lolita, by thrusting them into a backyard incinerator, and she had been the rescuer on that occasion. Perhaps this is what stayed in Dmitri’s mind, or perhaps with the passage of time it became easier for him to contemplate bringing to light what his father had wanted erased.

The Original of Laura, as a novel, is bound to disappoint those who expect another Lolita or even an Ada. Nabokov’s later works—Transparent Things, Look at The Harlequins!—were the products of a master stylist’s imagination, but they have never made the impact of the works he is best remembered for. And Nabokov was something of a collage artist, as many of the greatest novelists are, working over a period of years, overlaying an original and apparently complete draft with images and questions of increasing depth and density.

He ran out of time before he could do this with Laura, which he wrote as his illness progressed. “In my diurnal delirium kept reading it aloud to a small dream audience in a walled garden. My audience consisted of peacocks, pigeons, my long dead parents, two cypresses, several young nurses crouching around, and a family doctor so old as to be almost invisible,” Nabokov wrote. The novel was complete “in his mind”, but he wasn’t granted the time to transfer that completed version onto the page.

The number of index cards—a mere 138–for Laura is a giveaway. Nabokov wrote most of his works on index cards, as he records of the writing of Lolita: “I would spend another four-hour span in a lawn chair, among the roses and mockingbirds, using lined index cards and a Blackwing pencil, for copying and recopying, rubbing out and writing anew, the scenes I had imagined in the morning.” He used 2,000-odd index cards for Ada, which gives us a sense of just how fragmentary this version of Laura is likely to be.

Beyond the worlds of book collectors and the narrower reaches of academia, we have lost the space for marginalia, first drafts and other literary artifacts. Laura is fascinating in its own right-which is to say, not as Nabokov’s last unpublished novel, or even as his last unfinished novel, but as a study of a writer’s working methods in the early draft phase. For many of today’s writers, even if they keep working copies of their outtakes and early manuscript versions, the backspace and delete keys work against the curious literary scholar ever seeing a true “first draft”. Much of the early mistakes, the shifts in tone of a manuscript-in-progress are automatically, unthinkingly deleted by the screen generation of writers.

And Laura could also be fascinating to this generation of hypertext-friendly readers. Nabokov often took his finished stack of index cards and shuffled them, “dealing himself a novel”, as though the shoeboxes in which he kept his cards offered more possibilities of order and structure than anything the novelist might impose. He sifted, corrected and added to this final dealing, but that image of random and yet meaningful connections is closer to our wired age than it is to Nabokov’s pre-Mac times.

Perhaps some day Laura will be up in the form that might be most suited to it, as an endlessly changing and randomized collection of clickable index cards in a permanent online exhibition. Until someone designs that, we’re left with Nabokov’s final legacy—a novel that is, tantalisingly, not quite a book.