The BS column: A Book of Verse, and Thou 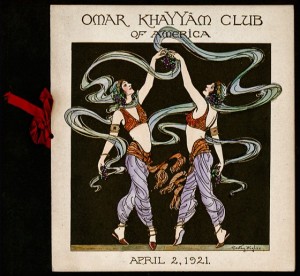 What connects an 11th century Persian mathematician, a 19th century English eccentric, poets such as Rupert Brooke and Algernon Charles Swinburne, and a 21st century Iranian translator and book-lover?

The book the world knows as The Rubaiyat of Omar Khayyam celebrates its 150th anniversary this year. The version of the Rubaiyat best known today is the translation by Edward FitzGerald, published in 1859 and rescued from the bargain-bins about a year later by Rosseti and the other pre-Raphaelite poets. The praise of Rossetti and Swinburne had the effect of raising the price from a penny to twopence, which Carlyle in particular saw as proof of the venality of booksellers.

FitzGerald complained that Khayyam’s work, neglected by his own country, had “been but scantily transmitted abroad”. The few manuscripts in existence had been, “mutilated beyond the average Casualties of Oriental Transcription”. The one at the Bodleian contained a mere 158 rubaiyat, or quatrains; the one FitzGerald had been sent by a friend who knew of his passion for obscure books, Oriental literature and botany, contained 516 poems. FitzGerald cut out “all kinds of Repetition and Corruption” that infested Khayyam’s work, and produced in his roughly hundred-quatrain version the Rubaiyat that we know today.

The vogue for the Rubaiyat in Europe was extraordinary. Rupert Brooke proclaimed that he was proud to have an exquisitely illustrated version in his personal library; Swinburne and Rossetti pressed the book on their literary friends; Omar Khayyam Clubs sprang up for the purpose of reading from the verses over elaborate dinners; and a relatively rare edition, embellished with a finely etched skull on the back cover, caused headlines when it went down with the Titanic.

At least three generations of Anglophone Indians shared the European enthusiasm for the Rubaiyat. Though Khayyam’s popularity has since waned, there was a time when every schoolchild could recite the better-known verses: “The Moving Finger writes; and, having writ,/ Moves on, nor all your Piety nor your Wit/ Shall lure it back to cancel half a line…”

The quatrains of the Rubaiyat that most disturbed Khayyam’s contemporaries were the verses that extolled “a Loaf of Bread, a glass of wine and Thou”, where, as subsequent verses made clear, the emphasis was on the wine. Islamic strictures against drinking made Khayyam’s frequent—and joyous—references to the tavern and the cup-bearer distinctly out of place. Khayyam would have enjoyed the company of the late Harivansh Rai Bachchan, whose Madhushala had many eminent critics squirming as the poet explained the grand design of life through the metaphors of the tavern, the glass, the wine and the incurable thirst of the drinker.

Khayyam’s real quarrel was with the stringent tenets of faith. He taunted his critics, questioning the doctrines of sin and hell, arguing that it would always be the unbelievers who knew the scriptures best. At its best, his Rubaiyat is a celebration of the uncertainty and richness of life, with the poet urging his listeners to enjoy the few moments they have. If we are all “helpless pieces on the Chequer-Board of Life”, Khayyam argues, we may as well accept that we have little say in the shaping of our lives, and instead draw on life’s richness as deeply as we can.

Khayyam spent his early years in Afghanistan, where his poems today would be considered near-blasphemous. His reputation as a mathematician and algebraist of renown eclipsed his reputation as a poet in Iran; it was only in 1988 that the Rubaiyat was translated by a fellow Persian, so to speak. Karim Emami’s translation is called The Wine of Nishapour—a reference to Khayyam’s hometown—and is far more faithful to the original, though less exuberant, than FitzGerald’s wildly freewheeling version.

Today, the Rubaiyat is a relic, a reminder, an embarrassment. Khayyam’s exuberance and unabashedly flowery phrases lack irony and bitterness, making him unsuited for the 21st century. His acceptance in the West has its roots in an age when “exotic” was not a damning epithet, when all things Oriental were eagerly embraced because they allowed such wonderful opportunities for fancy dress. And in India, the vogue for Khayyam is a reminder of a time when we bought our opinions and our poets wholesale from the West.

But it would be a shame if we celebrated only the more innocuous Khayyam. The poet of Nishapour is a reminder of the tradition of independent thinking in Islam, of the space that a Persian poet was once allotted to criticize his faith. In a world where the Iran war and the Afghanistan conflict are still alive, we could do worse than look again at the words of the iconoclastic poet who lived his childhood in one country and became a man in the other.

Elihu Vedder’s drawings for The Rubaiyat: The Smithsonian