What elephants! What tigers! 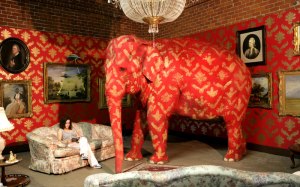 William Radice writes a well-meaning review of The Bloodaxe Book of Contemporary Indian Poets:
“Their poems start to rub up against each other, more interestingly and movingly in this anthology than in any other I have seen.”

Radice is an old India hand, but the rest of the review is illuminating because of his annoying assumptions about how Indian poets should write. “…For the reader of the anthology, the exuberance of India is precisely what is missing. Where are the colours, the light, the heat, the skies, the crowds and the birds? Where are the family relationships that the Indo-Anglian novelists have explored so lovingly?”

I was taken aback at that archaism–I haven’t heard anyone in India describe Indian writers by the term “Indo-Anglian” since the dark ages–and irritated at Radice’s appeal for Indian poets to abandon iambics in favour of the “tabla-beat of India”. It’s telling that he quotes Raine, who discovered India at the age of 74: “The place of every arrival, the term of every spiritual quest.”

Jeet Thayil, the editor of the anthology–full disclosure, on the McCrum scale quoted below, Jeet’s probably a 7–has responded:
“Radice’s orientalism would be quaint enough to be endearing – if it weren’t so annoying. He tells the reader (breathlessly, I imagine) that my anthology lacks “the colours, the light, the heat, the skies, the crowds and the birds” of India, not to forget “family relationships”, “children” and groups of enthusiastic “Indian university students”. What a happy picture must be playing in Radice’s overheated 19th-century imagination! What elephants! What tigers! What heat and dust and palanquins!” Check out the lively discussion in the Comments section.

Why am I blogging this? Not just because it’s a “fight” or a controversy. Not just because Jeet is a friend. But because this exchange feeds into a very contemporary debate, where many of us are beginning to question what the West wants to read about India and how it wants Indian authors to respond.